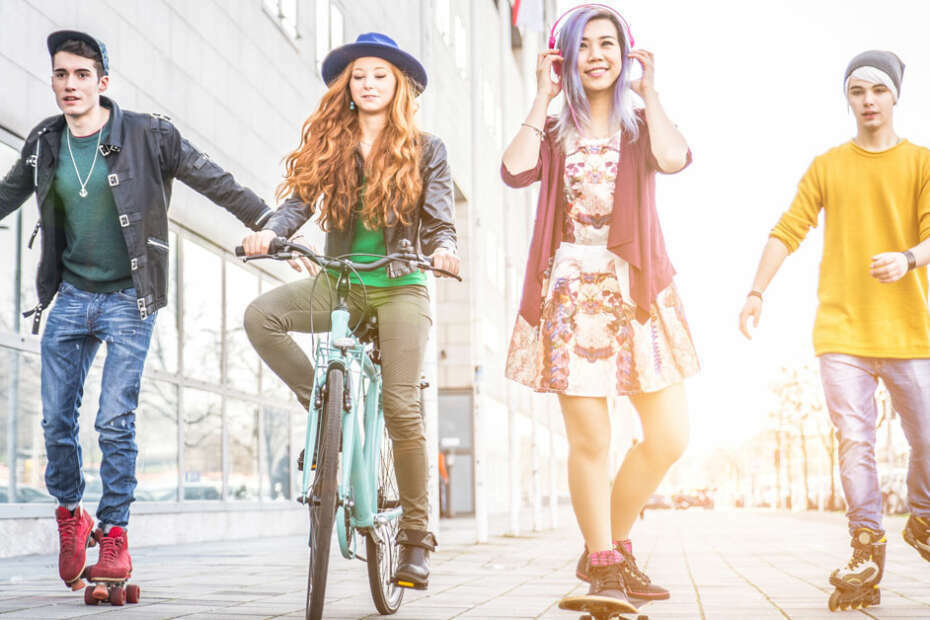 No discussion about 2000s fashion can be complete without discussing the rise of emo fashion. It defined the early years of that decade with its deep blacks, vibrant pinks, and flashy piercings. It was bold, confident, and at times, a bit too much. But, above all else, it was interesting and unique.

What Was the Early 2000s Emo Fashion?

The 2000s emo fashion was a style of clothing inspired by emo music. The word emo is short for “Emotional,” as emo music was filled to the brim with overflowing emotions. It was squarely marketed towards young teenagers, and it worked flawlessly. If you went to high school in that era, then you would know the extent of emo fashion’s popularity. Not to mention the influence goth and punk styles had on emo fashions of that time.

You would see young men and women dressed up in ripped jeans, long-sleeved t-shirts, and face-covering hair. As well as eye-liner, clothing layers, and studded belts. It also became synonymous with nerd fashion and nerd culture in general, which further increased its outreach.

Although the emo culture was popular among both boys and girls equally, the fashion on the female side was a lot more varied and fascinating. The frontrunner was the traditional black skirt with a longline t-shirt. Then there was the classic combination of ripped black jeans and printed short-sleeved t-shirts. But the story doesn’t end with fabulous outfits, as colorful haircuts and bold jewelry were also a prominent part of this movement.

The craziest part of emo fashion was the diversity within this one style. It got so big that several sub-styles of emo became their own thing, and goth was one of them. Emo style loved black, but it was just as big a fan of cold colors and striking patterns. Goth, on the other hand, was the obsession with grunge and black. A goth-style outfit consisted of black shirts, black pants, black hoods, black shoes, and even black makeup and hair.

While the hardcore goth style faded over time, it is still an active part of fashion around the world. While you might not wear thick black eyeliner and cover your nails in black paint, you are still representing a core part of goth fashion every time you decide to wear a pair of black jeans with a black shirt, shoes, and jacket.

Although the most famous period of emo fashion in the 2000s, it started its journey way before that. We can historically see a similar style beginning all the way back in the late 1980s. However, 90s fashion is when the “modern” emo style took shape.

All in all, 90s emo fashion was a bit tame and colorful compared to the 2000s. Long flannels were a must-have, and they were worn over clean white t-shirts and ripped jeans. Another major trend was baggy jeans with hooded sweatshirts. These sweatshirts often had some video game related or some other nerd-related print on them.

So, you want to recreate the classic 2000s emo outfits today, is it possible? Is that style still in?

Yes, it is possible, but the emo recreation of today is a bit different. The confident vibrancy of the traditional emo fashion has been toned down a bit in favor of more mature and well-rounded outfits. Luckily you can still recreate a similar aesthetic with your attire just by putting some extra effort into it.

Let’s take a look at a few examples of the best modern options. Here’s how to get the emo Style.

The first way to recreate emo fashion is to embrace fitted black clothing and layers. But, how do you make a decidedly old-school style feel modern? The key to pulling this successfully is to stay simple. A perfect example would be a pair of fitted or dark blue jeans, a long, distressed white t-shirt, and an oversized black hoodie with a colorful illustration/print on the front. The print saves the outfit from becoming too boring, while the loose design keeps it close to emo.

You can then introduce things like metal chains, rings, earrings, etc., to spice things up and create something entirely unique to you. Not to forget the signature black eye-liner and long bangs in front.

The emo fashion of the 2000s was extremely diverse and personalized. However, there were a few clothing items that were owned by everyone following this style. One of these must-haves is leather jackets. They provided style and comfort throughout the year, no matter how cold it got.

The part about this particular combination is that it is extremely easy to pull off, provided you have the right type of jacket. There are many designs of leather jackets out there, but the one we’re interested in is a fancy biker jacket with spikes all over it. Of course, the number of spikes is totally up to you, and even a moderate amount will get the job done.

For ladies, the best combination for leather jackets is black skirts or tight-fit black jeans, alongside a black or white t-shirt. For men, the jeans and t-shirt combo is the same, but they can also try a combo of a shiny leather biker with a brown sweater and a pair of baggy sweatpants.

Emo and denim go together as well as peanut butter and jelly. But you cannot just wear normal denim jackets or pants. Instead, ripped denim pants and denim jackets with torn or distressed aesthetics are the best choices. A sleeveless denim jacket over a short-sleeved t-shirt used to be the ultimate summer attire for many emo fashions fans.

While just wearing a denim jacket over regular emo clothes will make them look substantially better, you can further increase your style points by utilizing accessories like metal watches, bracelets, rings, and beanies.

Lastly, we have the quintessential must-have for emo nerd fashion, a hoodie. The emotional side of emo was often about being lonely and closed up, and hoodies materialized those feelings better than anything else. Although the current climate of emo fashion is not as “emotional” as it used to be, hoodies are still a great choice.

You can easily pair them with black and white striped leggings and denim shorts, or you just go back to the classic ripped jeans. Whatever you choose to wear underneath the hoodie does not matter that much. What does matter a lot is the hoodie’s design. Generally, you want a closed-front hoodie with something interesting printed on both the front and the back.

Hopefully, you now have a better idea of what emo fashion was, what is its place in modern-day fashion, and how you can revive its spirit without looking over the top or edgy. But there is still a lot more to learn on this topic.

Here are a few of the most frequently asked questions regarding 2000s emo fashion.

The emo look in the 2000s consisted of variations of spiked leather jackets, punk rock hoodies, black leggings, skirts, ripped jeans, and long-sleeved t-shirts. There was also a lot of emphasis on makeup and accessories.

All of these elements were combined in distinct ways by different individuals to create outfits that were unique to them, as well as a part of something larger; a whole community that shared their passion and understood their feelings.

Is Emo Currently in Style?

After the emo trend of the 2000s slowed down a bit, there were many years when emo was considered cringe and weird. But, just like every other popular fashion of the past, history is repeating itself for emo fashion as well. Sure, you still cannot wear a 2000s emo outfit without getting wide looks from everyone. But you can revisit the style in moderation and mix its elements with modern clothing.

Is Wearing All Black Emo?

Whether an all-black outfit represents emo fashion or not depends entirely on your intentions. However, your execution matters as well.

Can I Wear Mom Jeans in Emo Fashion?

Not really. Although traditionally, emo style rotates around fitted silhouettes, you can experiment with baggy mom jeans or boyfriend jeans and achieve a different look altogether.

What Colors Can I Wear in Emo Style?

Contrary to popular belief, 2000s emo fashion is not just all-black. That title is held by the subsection of emo known as goth.

Emo fashion allows you to wear all sorts of colors like red, green, blue, and yellow, both as solid colors and in patterns. The only thing to keep in mind is to embrace whatever color you decide to wear. Let it be bold and attention-grabbing.

Emo fashion, in its complete quirky glory, is not returning any time soon. However, individual style elements from that era are still here and thriving. If you think your everyday clothing is becoming boring and predictable, why not integrate a few of these emo fashion remnants into your wardrobe? You’ll gain new outfits to wear while also filling your existing fashion catalog with a new, vibrant light.