What is a Duffle Bag? 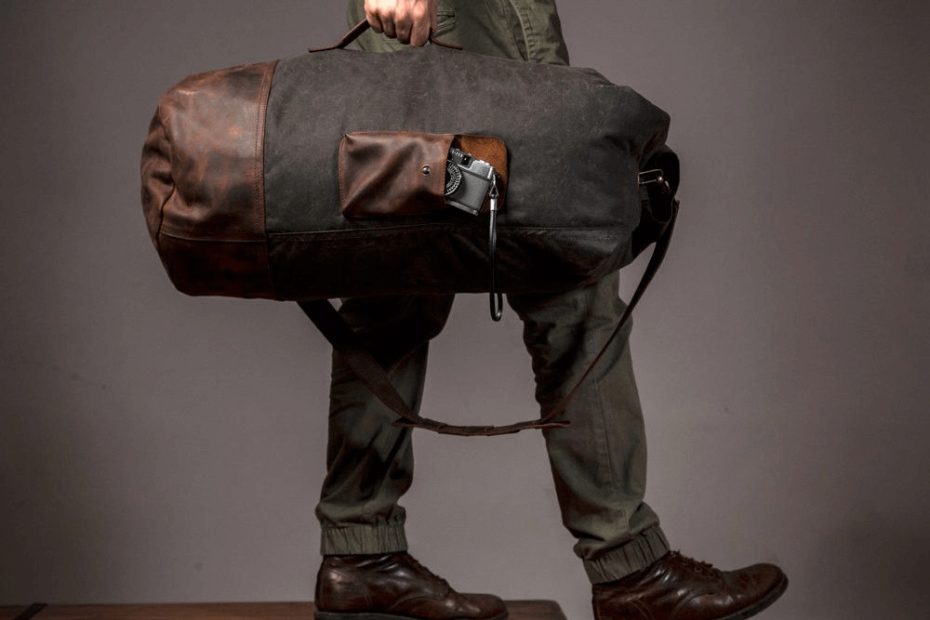 When it comes to statement accessories, bags would undoubtedly make the cut. As they have a way of adding depth and dimension to any look. Helping to complement one’s outfit by adding not just shape and structure for visual interest, but also a bit of colour that can influence the eye to linger on the design and detail of such a piece as a bag. One particular type of bag that effortlessly achieves all of the above and more, are Duffle Bags.

A Duffle Bag or Duffel Bag (American) aka a Kit Bag is traditionally a cylindrical bag made of canvas, leather or other sturdy, real or synthetic materials that feature a drawstring closure. Carried over the shoulder or on the back, it was originally used by the military. So much so, it was often called a Sea Bag by the marines and sailors in particular. The structure of the then Duffle Bag, had a vertical shape that had an opening at the top. Having no typical rigidity found in most bags, enabled it to adapt to various situations and positioning. This was great for the service men especially on commutes.

Over the years, Duffle Bags have evolved and hence received several changes that include its silhouette, structure and usage among other qualities that now cater to civilians from different walks of life. Today Duffle Bags are used for sports, travel and recreation and are available in different sizes, colours and materials to better serve various purposes.

Not knowing the origins of Duffle Bags would leave this post incomplete. So let’s go through a quick history of this world-wide favourite. While the true origin of the name ‘Duffle Bag’ is still a debate, many are of the belief that Duffle Bags received their name from ‘Duffel’ a town in Flanders, Belgium. It was here that the thick Duffel cloth used to make Duffle Bags was also made dating back to the 17th Century. This type of bag became widely popular in many parts of Europe including Spain and Portugal.

Another narrative formulated years later indicates Poet E.E Cummings to have coined the term Duffle Bag during WWII. So what were these bags called before then? These Duffle Bags were cylindrical, vertical bags closed at the top using a drawstring rope. These doughboy duffle bags were mostly used to carry such items as military supplies. Post war, it became widely popular among civilians which was further elevated due to their affordability mainly due to being in surplus at the time.

By this time, Duffle Bags were referred to a very particular type of bag, in a specific style; typically cylindrical, having a top closure. This was the vertical model that was commonly used in the service. However, over time; it became a somewhat generic type of bag that developed a few different variations mainly involving size, design and material. Today, it shouldn’t be a surprise to find Duffle Bags featuring such elements as zippers, wheels at the bottom and several internal and external structural developments to not only suit the times but also serve the functional aspects of one’s lifestyle.

By now, we’ve pretty much covered all the essentials regarding Duffle Bags and their history. Did you know that there are currently different types of Duffle Bags that are equally popular as the ones introduced previously. Let’s go through them real quick and learn a bit about each of them.

A rectangular, boxed shaped Duffle Bag that features a side zipper closure, offering side; zippered compartments on each end are elements found most often in Squared Duffle Bags. This would be a great option for organized traveling making this a go-to for smooth transit. It is also quite common to find plastic coated piping along the structure of this type of Duffle Bag that gives them that rigid quality. A good point for those working in the line of duty. This is quite often a Custom Duffle Bag that can also feature additional padding for weaponry or other modes of ammunition in the service.

Another major type of Duffle Bag that is also widely popular are Wheeled Duffle Bags. Despite their firm and stiff bottoms, the built-in wheels make them a hit with tourists and travellers. They’re a great option for people having to walk long distances with their bags. Featuring a wide opening and a U shaped zipper closure running along the length of the top. This type of Duffle also offers the most sections or compartments for great organization and ample storage. Importantly, the wheels on the underside make it easier to carry heavy loads.

This type of Duffle offers two variations. The traditional Barrel Duffle Bag is technically a fabric made, tubular bag with straps. The original design features a top closure which involves an opening at the top which is closed using a drawstring. These top closure varieties are very often larger in size than most Duffle Bags in general. This makes it a great option for carrying large equipment. The military have used this version of the Duffle Bag that was made of a thick canvas material. The top closure and loading options that exhibit great durability, make this a widely popular option of Duffle especially in active, outdoor situations.

The second version of this Barrel Duffle Bag features a size zipper closure that runs along the length of the bag. These bags can also be made of tough canvas material as was used in the first version, however a more popular offering involves this bag made of woven polyester with a plastic coating. When it comes to size, this version of the Duffle is rather smaller in dimensions as opposed to the top closure version. This version is also called gym bags and many athletes have been seen carrying this type of Duffle to load smaller sports equipment. Interestingly, one common element found in both versions of this type of Barrel Duffle Bag is that they both offer one compartment each. This makes for an easy toss and turn of items in the bag when in movement.

Why do they call it a Duffle Bag?

Popular belief says that the Duffle Bag received its name from Duffel, a town in Flanders, Belgium.

What is the use of a Duffle Bag?

While Duffle Bags were originally used by the military, modern day uses for Duffle Bags include, gear storage, gym bag, beach bag, travel, weekender and a host of other uses for this easy to carry bag.

What to look at when buying a Duffle Bag?

If you are seeking to buy a Duffle Bag for a specific reason, go through the bag and see how it will best serve its purpose. Have a close look at the material from which it is made, as well as the size and colour, the storage space, compartments if any, straps and other features and last but more importantly its durability.

What does Duffle Bag mean?

A cylindrical shaped bag originally vertical, having a top drawstring closure and made of either real or synthetic material that are highly sturdy.

Who invented the Duffle Bag?

As uncertain as it was in the past, the invention of the Duffle Bag continues to remain caught up between two narratives. One plausibly linking to a European town of the same name, which also produced the strong fabric used to make Duffle Bags and another narrative that calls for an American poet who coined the name during WWII.

What size Duffle Bag do I need?

Based on requirements and usage, it is best to look for a size that serves due purpose. With extra storage capacity that is always welcome.

What makes a good Duffle Bag?

A good Duffle Bag would be one that is made of strong, durable materials such as a real leather duffle bag. Featuring sturdy closure, zippers and straps and offering ample or more storage through compartments, pockets and more.

What material is a Duffle Bag made of?

While Duffle Bags were initially made of synthetic materials such as canvas, modern Duffle versions include Leather, Nylon, Cotton Canvas, Cordura, Denim, and Neoprene.

Yes, if the size isn’t too large, Duffle Bags can also be used as carry-ons. Provided they are in accordance with the baggage specifications of the airlines being used. It’s best to check beforehand.

What’s the difference between Duffle and Duffel bags?

Based on region and language, Duffle is used in British English as well as Australian English while Duffel is used in American English.

Having gone through some unique points on Duffle Bags, from its history to its inspiration leading to the different types of Duffles, it is all too apparent that as rich as its history has been, it is equally popular today than it’s ever been all over the world. So the next time you see a Barrel style Duffel Bag or a traditional Duffle down the road, you now know a lot about it to go and get your own. If you’ve already got one then surely, this post has inspired you to add another to your personal collection of Duffel Bags.