Even in a digital age, many people across the world still treasure certain valuables with fond memories and high regard. Whether it be attached to loved ones or past memoirs to be locked in memory for many years to follow. Fred received a unique leather jacket from his parents, many years ago, one which he not only loved but wore with pride, showing off his cool leather jacket to the world. What was striking about this jacket was the many flags of various countries, forming a type of collage on the jacket surface with functional pockets and details that made it special. 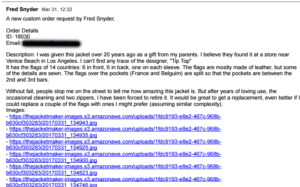 An Extract of the Email Conversations between Fred and The Jacket Maker.

On the downside, many years later and after wearing it as frequently as he did, the jacket was no longer wearable which led Fred on a search for a jacket even remotely similar as this but to no avail. This would be the time where he’d discovered The Jacket Maker and inquired our Customer Support Agent if this jacket could be replicated? The Jacket Maker known for taking on any challenge, said yes not only to replicating this unique jacket but to make one that would be way better. Fred was happy to hear this and decided to add a bit of his own favorite elements to this new design which included replacing a couple of the flags with ones from countries he could relate to. 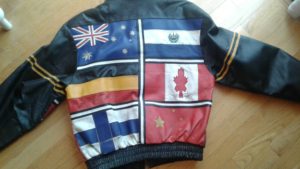 Fred Shared a Few Reference Images which Included the Jacket Given to him by his parents. Here is a view of the back. Notice how worn it looks. 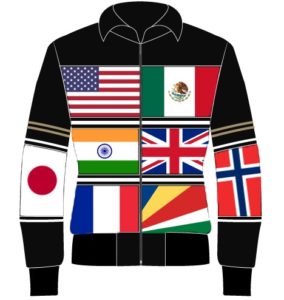 The Mock-up of the Jacket that was Sent to Fred for Approval.

Without any delay the process for this spectacular jacket had begun with regular conversations between Fred and our team, sharing details and swapping mock-ups via email to be agreed on and finalized before moving further. From the type of leather to the size, closure type, detail and so many other factors had to be considered before moving on. Once the jacket mock-up was confirmed by Fred, it was sent to production where it was given material shape. When it reached the studio, it was photographed on an in-house model and shared with Fred who liked what he saw. This led to the jacket to be packed carefully and shipped to Fred’s earlier mentioned address. Upon receiving his jacket, Fred shared his joy and satisfaction with not only our team but with the people around him. 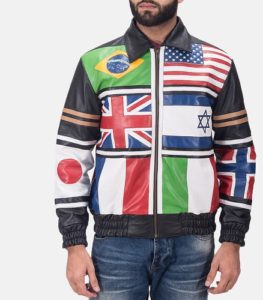 A Front View of the Jacket that was Shot on an In-house Model. This was Shown to Fred for Approval. 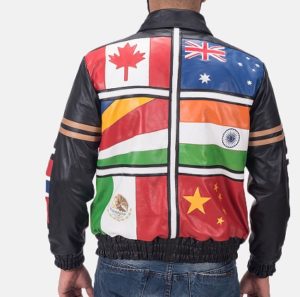 A Back View of the Jacket that was Shot on an In-house Model that was shown to Fred for Approval.

Interacting with people like Fred and working with so many others with special stories and unique design ideas, mementos, and personal styles and attributes, not only make us thrilled with what we do but encourage all of us at The Jacket Maker to strive to perfect our processes and offer a customer experience that is truly as memorable as the customers themselves.

The 15 Best Full Grain Leather Jackets and Coats for Men